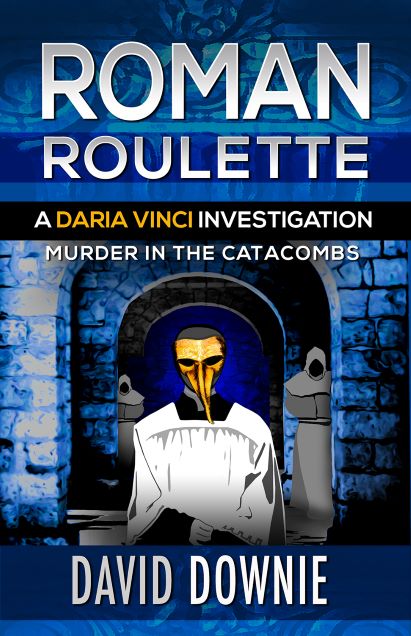 Roman Roulette: Murder in the Catacombs, coming on November 1, 2022

Commissioner Daria Vinci’s Second Investigation (after Red Riviera: Murder on the Italian Riviera) is coming out on November 1, 2022. Published by Alan Squire Publishing (ASP), Roman Roulette is already garnering praise from leading writers and critics including Patricia Bracewell and A. E. Aymar. See their endorsements below. Kirkus Reviews says Roman Roulette “abounds with quirky, memorable characters” and is “a treat for those who would love a Roman holiday.”

Here’s the deal: this time Daria Vinci is in deep with the Mother of All Bureaucracy and Intrigue, i.e. Rome.
The intrepid Commissioner was supposed to be enjoying a night off at a benefit concert for the Institute of America in Rome. Little did the wealthy, distinguished guests know that beneath their feet, in the ancient catacombs, a very different kind of gathering was being held. One that would end in death….

In Roman Roulette, Daria’s second investigation, the glamorous and high-principled police commissioner of DIGOS, Italy’ s FBI, must investigate what at first seems a simple case of suicide. In doing so, she attracts the attention of her boss, the Questor of the Province of Rome, who has his own reasons for wanting her off the case. Now, Daria Vinci must solve the murder in 36 hours, while risking her career and, possibly, her life.

“In his latest mystery, Roman Roulette, David Downie takes readers into the sumptuous and sordid culture of modern day Rome. Evoking echoes of Italy’s Cold War past, Downie spins a tale as dark and twisting as the catacombs that snake beneath the Eternal City.” — Patricia Bracewell, author of the Emma of Normandy Trilogy

“David Downies’ Roman Roulette is more than an intriguing mystery — it’s a commentary on the differences and parallels between American and Italian politics and culture, all while providing a lush view of Roman life. Fans of crime fiction informed by recent events, but written with a passionate knowledge of societies and the complexities of shared history, will find much to savor in these pages.” — E. A. Aymar, author of The Unrepentant and No Home for Killers