Everyone knows about the focaccia of Genoa and the Italian Riviera but who remembers the region’s hardtack? Sea biscuits? Those hard, dry crackers that sailors used to take with them on long journeys, because normal bread got moldy within days?
In Italian sea biscuits are called “gallette” (the same word is used for the surf-worn, flattened stones you find on beaches). There used to be hundreds of bakeries up and down the coast of Italy, and in America too, that made sea biscuits. Now only a handful in Liguria continue the tradition, and only one makes gallette in the old-fashioned way, meaning the way they were made in the 19th and early 20th centuries.
That bakery is called Panificio Maccarini. It’s been around since the 1890s, and it’s in San Rocco di Camogli, 23 kilometers southeast of Genoa (on the road to La Spezia and Tuscany). Maccarini’s sea biscuits are about half an inch to 1 inch in thickness, highly porous, and as hard as a rock on the outside. If you’ve ever wondered what the meaning of “bone dry” was, this is it. They seem to have a kind of shell, like a sea creature. It’s this rock-hard exterior that preserves them: they last for months and months. We use gallette to make the Liguria seafood salad Capponadda (it’s not the same as the Caponata of southern Italy). We use them in soups (especially ciuppin’, the ancestor of San Francisco’s cioppino seafood stew). And Alison, who has good strong teeth, likes to snack on them as is.
There’s a twist to this dolphin’s tale. San Rocco is named for Saint Roch, the helper of plague victims, according to the church of Rome. When he was himself dying from the plague, a saintly dog took pity on him and brought him a loaf of bread—no one would approach him. That loaf is represented in many paintings, especially those of the Seicento (17th century), as a sea biscuit. So whether you’re a freethinker or a Catholic it’s only right and natural that the Maccarinis continue to make Saint Roch’s sea biscuits, with the church dedicated to this friend of dogs and plague victims looming above, 50 yards from the bakery. 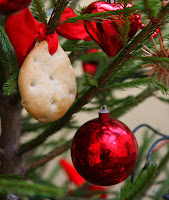 At Christmas time, the Maccarinis decorate their fir tree not with Santa Claus but with miniature gallette. I wonder if, after the holiday season is over, they use the gallette in their soups and salads. Not really. Actually, those mini-sea biscuits probably last about 100 years. As long as they don’t get wet, gallette are perennials.