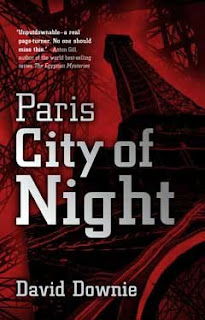 Whether or not you enjoy the music of The Doors, whether or not you’re a fan of Jim Morrison, it’s worth detouring to Pere-Lachaise cemetery in Paris to see the crowds that gather on July 3 to celebrate, mourn or scorn the rock star. He died in a Paris bathtub on a hot July 3rd, 1971 and was buried here, in the east of Paris, in the 20th arrondissement. The circumstances leading to his death are still the subject of speculation. Was he murdered? If so, why? By whom? The CIA? Why would they bother?

Morrison surfaces more than once in Paris City of Night, my new thriller. He’s one of the background voices in the head of Jay Anthony Grant, the novel’s antihero, the “son of a spook.” Jay finds himself locked into the cemetery after hours. Here’s how the Pere-Lachaise chase scene begins:

Groping, Jay searched for a tomb big enough to crawl into. He recognized the curving path that led to the grave of Jim Morrison, a hallowed spot scattered with keepsakes and trash left behind by rock ‘n roll pilgrims.
By a bizarre twist of fate James Douglas Morrison had been fished out of a bathtub in Rue Beautrellis on July 3, 1971 and been buried here, in Pere-Lachaise, the repository of France’s great and good. Morrison had become the object of cults. People crawled around his tomb day and night wailing Jim, come back to us…

Here’s another snippet from the novel featuring Morrison:

In a section marked “1971” Jay found the photos he’d taken on July 4th at what he later thought of as the Jim Morrison Memorial Barbecue. The photos showed the farmhouse caretaker at his grill with tongs and a glass of wine, the clotted cream of his complexion darkened now by chemical discoloration. A yellowed International Herald Tribune newspaper clipping showed a series of photos taken in a Paris street. The newspaper’s headline was three inches high. Rock Idol Dies in Paris Bathtub. A group of clean-shaven men in summer suits stood behind the gendarmes. Though partly covered by the eternal beige raincoat, one suit was familiar. Someone a long time ago had circled William Grant with an orange crayon. Jay wondered what kind of expression his father wore as he peered into the bathtub and cursed Jim Morrison, the drugged-out subversive idol. Morrison’s greatest crime turned out to be his inconvenient date of death. July 3rd. How many all-American family barbecues had he ruined?

So, wherever you are, happy death-day, Jim!